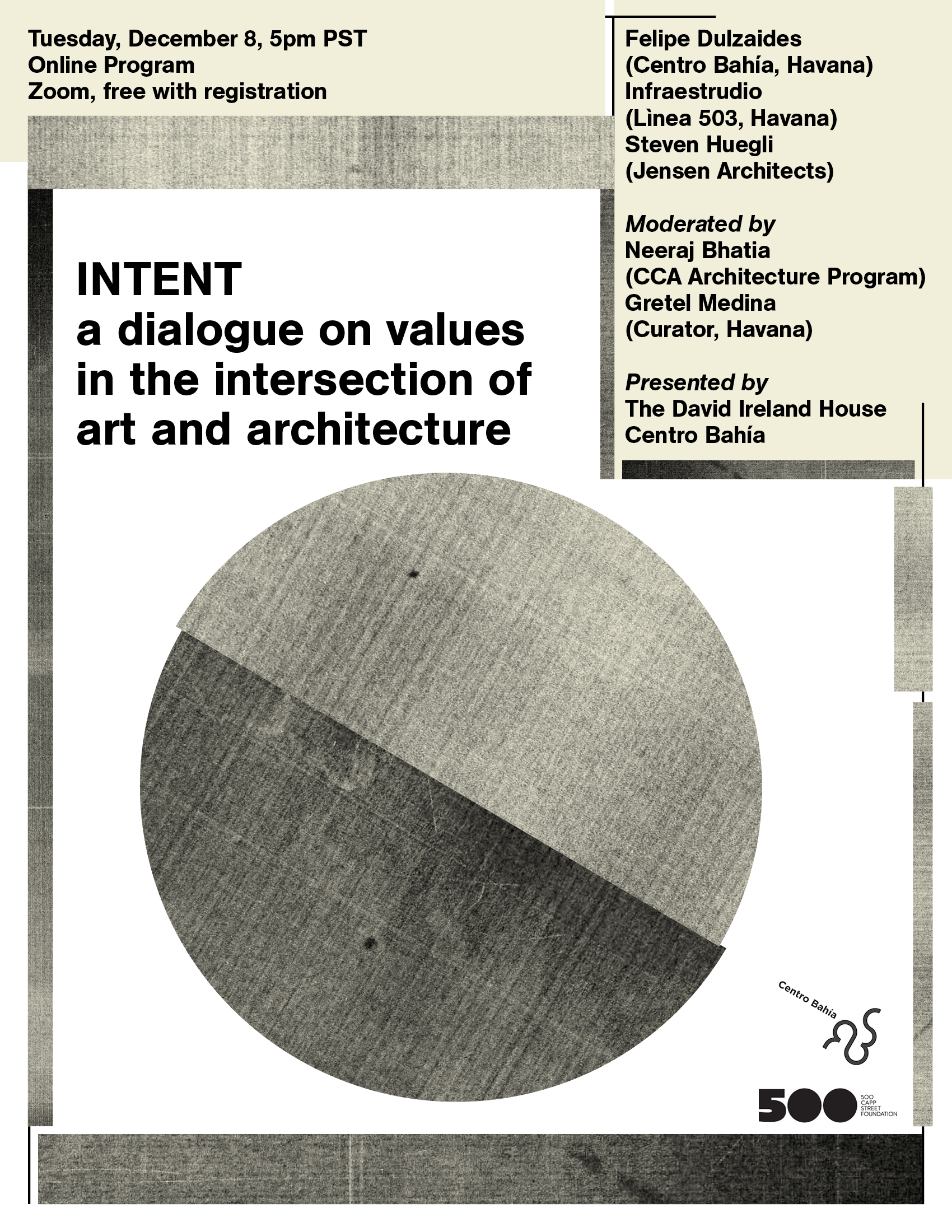 INTENT: a dialogue on values in the intersection of art and architecture

Stream this online program archived on our YouTube channel

Is there a blurred line between reconstruction, adaptive reuse, and stabilization? David Ireland insisted he was “stabilizing” his house at 500 Capp Street over reconstructing it. How do we negotiate between patrimonial values in architecture and softening the hard edged lines that intersect preservation, urban use, and artistic practice? Artist Felipe Dulzaides encountered a similar process while working on his architectural restoration project Centro Bahía in Havana, Cuba, an interdisciplinary art space located across the shore of Havana’s bay.

For this online dialogue, Dulzaides is joined by Cuba-based architecture and art studio Infraestudio and San Francisco-based Steven Huegli of Jensen Architects for a lively discussion, moderated by associate professor Neeraj Bhatia of the California College of the Arts Architecture Program and independent curator Gretel Medina, about their experiences working on art spaces that were formerly domestic environments, including The David Ireland House itself, Centro Bahìa and Lìnea 508 in Havana, and more.

Infraestudio will share their work on project Línea 508 in Havana, a structure built in 1888 which was almost untouched until they transformed it into an art center. And, Steven Huegli will share the challenges of creating structures and spaces with embedded culture and environments, including The David Ireland House, Ann Hamilton’s tower, and Fort Mason Center.

This dialogue is grounded by Dulzaides’ mixed-media installation Santurio #21, currently on view through Dec. 19 in the exhibition There is no such thing as a perfect circle. The work artfully documents his life-art restoration project, the creation of Centro Bahìa, where he has developed a socially active studio space. How can you maintain cultural heritage while transforming historic houses into art spaces? How does adaptive reuse relate to the reduction of environmental impact?

In addition, Dulzaides’ video work, Water Runs, will be made available online for a limited time December. 1-19, 2020 to further connect this public program with online viewers. In Water Runs, the artist uncovers the history of Cuba’s National Art Schools which reflect utopian revolutionary exuberance. Dulzaides gestures to reclaim this space by cleaning the gutters of the school and allowing water to run again, a symbolic action that evaluates an identity revitalized.

This program takes place online via Zoom. Free with registration. All times are in Pacific Standard Time (PST).

There is no such thing as a perfect circle is on view through December 19, 2020.

Neeraj Bhatia is a licensed architect and urban designer whose work resides at the intersection of politics, infrastructure, and urbanism. He is an Associate Professor at the California College of the Arts where he also co-directs the Urban Works Agency. Bhatia has also held teaching positions at UC Berkeley (as the visiting Esherick Professor), UT Arlington (as the visiting Ralph Hawkins Professor), Cornell University, Rice University, and the University of Toronto. Bhatia is founder of The Open Workshop, a transcalar design-research office examining the negotiation between architecture and its territorial environment. Select distinctions include the Architectural League Young Architects Prize, Emerging Leaders Award from Design Intelligence, and the Canadian Prix de Rome.

Felipe Dulzaides studied drama at the Instituto Superior de Arte of Havana and received an MFA from the San Francisco Art Institute. A poetic and metaphoric sensibility underlies his practice, which includes single- channel videos, photography, drawings, and installation. Some of his works begin with actions executed for the camera; others use autobiographical experiences to address the emotional stress of cultural displacement or to reveal memory as an unstable process of endless revision. His studio, located in the historic area of Regla-  across the shore of Havana’s bay, is also a project space called Centro Bahía. Centro Bahia’s mission is to stimulate community dialogue, experimental art, and interdisciplinary academic exchanges. Due to its location, Centro Bahia plays an active role in the urban rehabilitation of the historic neighborhood.

Steven Huegli has a distinct architectural background with experience in site-specific installation work, craft, and experimental use of construction materials. Many of his projects have been recognized by local and national awards; and his representations are included in SFMOMA’s permanent collection. Huegli has a long-standing commitment to mentoring young professionals including teaching positions at California College of the Arts and University of California, Berkeley where he attended graduate school. Huegli is a Principal and Studio Director at Jensen Architects, a design-oriented architecture firm exploring innovative approaches in search of design solutions that are elegant, effective, and environmentally sensitive.

Infraestudio is an architecture and art studio founded in 2016, directed by Anadis González and Fernando Martirena. Based in Havana, Infraestudio has developed an expanded practice of the discipline through the creation of concepts that take shape in architecture projects, urban investigations, works of art and artist’s books. They have exhibited their work at the 11th and 12th Biennial of Havana, and have participated in several personal and group exhibitions.  Among their most important projects is the Linea 508 Contemporary Art Center and Casa B, both currently under construction.

Gretel Medina is an independent curator and art critic based in Havana. She was head of exhibitions at Centro De Desarrolo De Las Artes Visuales, La Habana from 2013-2019. During this time, she led the team that curated the XI (2014) an XII (2017) Cuban contemporary art salon. She was a guest curator of XII Havana Biennial 2015, and in 2019, was part of a curator’s team for the XIII Havana Biennial.