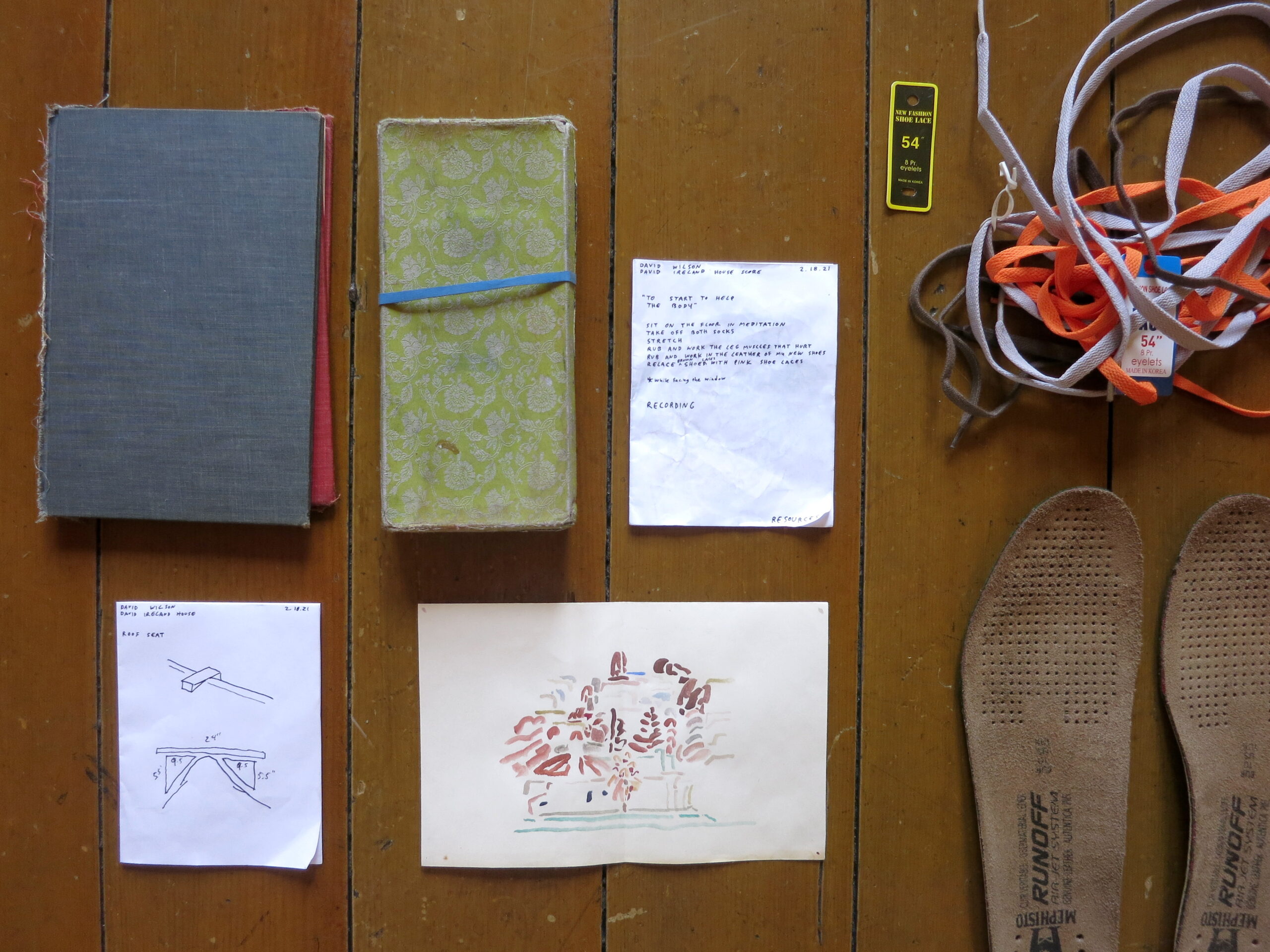 Three mornings a week, Bay Area artist David Wilson climbs a hidden ladder through the attic of The David Ireland House to the roof where he perches on the steep peak to draw the same westward view of the surrounding neighborhood. Wilson, who creates observational drawings based on direct experiences with landscape and orchestrates site-based gatherings, is The David Ireland House’s first long term artist-in-residence. Given free rein to investigate the House on his own as it remained closed due to the pandemic, Wilson was immediately drawn to the roof. For Wilson, it is a place to contemplate the vacillation between the interior and exterior, a way to heighten his sense of where he is, and a means of situating artist David Ireland’s historic home turned work of art within the neighborhood.

The results of Wilson’s 4-month exploration of the House, its archive, and the streets around it will be on display. The free exhibition encompasses an installation of his work within the rooms of the House, often in conversation with objects of interest from the Ireland archive, and the transformation of the House’s garage into a street-accessible space where visitors can pick up maps to sites of neighborhood intervention where they are invited to sit, discover small artist-created offerings, and leave their own mark on the project.

Taking inspiration from Anna Halprin’s concept of a score, and a David Ireland Print, A Variation on 79, Side to Side Passes of a Dumball, Dedicated to the Memory of John Cage, [1912-1992], 1993, Wilson creates a “score for walking.” The artist orchestrates a feeling that one has “arrived” at something, thinking about simple concepts (like a walk) – yet having taken away an onomatopoeia of an experience. In the exhibition, the artist explores unique points of arrivals generated in the process of creating a score.

David Wilson also gestures towards ephemeral public interventions around the neighborhood in which he points us to three immersive ‘Sitting’ nooks. In them are hidden offerings, recordings by poets and musicians, that serve as an invitation and a means of creative connection. You can drop by our Garage any time during open hours and pick up free artist-created maps to the sites. Visitors can use their maps for a self guided outing and sitting at any time, 24 hours a day, 7 days a week.

Each Saturday, new recordings will be dropped into the various spots, so there’s always something new to experience. Delaplane Gallery kicks off the exhibition with a curated poetry series. Check our website for the schedule of releases, and stay tuned to this space for updates on live happenings in our Instagram stories.

The public installation sites will feature recordings of artists, musicians and writer/poets Prasant Radhakrishnan, Ship (Frank Lyon, David Wilson), Larry Rinder and Colter Jacobsen, Peekaboo, Zero Charisma, DJ Sin Amores, Maggi Payne, Sophia Shen, Mariposas Del Alma. One site will host a recorded poetry series curated by Cole Solinger and Sophie Appel of Delaplane Gallery featuring Tongo Eisen-Martin, Gin Hart, Trisha Low, James Cagney, Todd Blair + Creative Growth Poets, and Norma Cole. Every Saturday throughout the exhibition, a new recording will be released at alternating sites and will remain installed and visitable until the next recording replaces it.  See the below schedule to find the upcoming release days when new recordings can first be visited. We will be sharing updates on when new recordings are happening and being released on instagram (@500cappstreet), so stay tuned.

David Wilson creates observational drawings based on direct experiences with landscape and orchestrates site-based gatherings that draw together a wide net of artists, performers, filmmakers, chefs, and artisans into collaborative relationships. He organized the experimental exhibition The Possible at the Berkeley Art Museum and Pacific Film Archive (BAMPFA) and received the San Francisco Museum of Modern Art (SFMOMA) 2012 SECA Art Award. He has exhibited his work with SFMOMA, was included in the 2010 CA Biennial, and presented a Matrix solo exhibition at BAMPFA. Wilson has received grants from The Andy Warhol Foundation, Southern Exposure, The Center for Craft and the Kenneth Rainin Foundation. He is based in Oakland, CA.

SIGN UP TO RECEIVE A SPECIAL PRINT MAILING, from David Wilson’s “Sittings” exhibition at The David Ireland House.