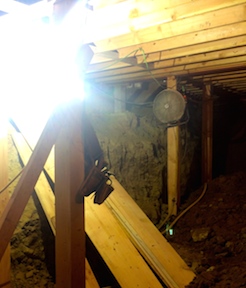 Next week we observe Veteran’s Day, honoring the brave men and women who have served our country. David Ireland served in the army from June 1953 to 1955, shortly after graduating with his undergraduate degree from California College of Arts and Crafts. While often overshadowed by his other career in insurance and his company Hunter Africa, the army most certainly made an impact on David’s career trajectory. One of the greatest gifts from his time in the army, David later reflected on, was the GI Bill. This allowed him to return to the Art Institute for his graduate studies, which led David to pursue art full time.

500 Capp Street eventually became the cornerstone of David’s art career, and the reason preserving the home with a new foundation is so vital. As of today the underside of 500 Capp Street has been completely transformed over the past three months. What was once a shaky structure, held together with a few scattered beams and wooden shims, is now a sturdy base with fresh lumber and steel beams. The floors that once sloped in the entryway are now flat and sturdy. The safety of the home has already been greatly improved. Concrete will begin to be poured late next week, and we will continue to keep you updated as we move on to the next phase.