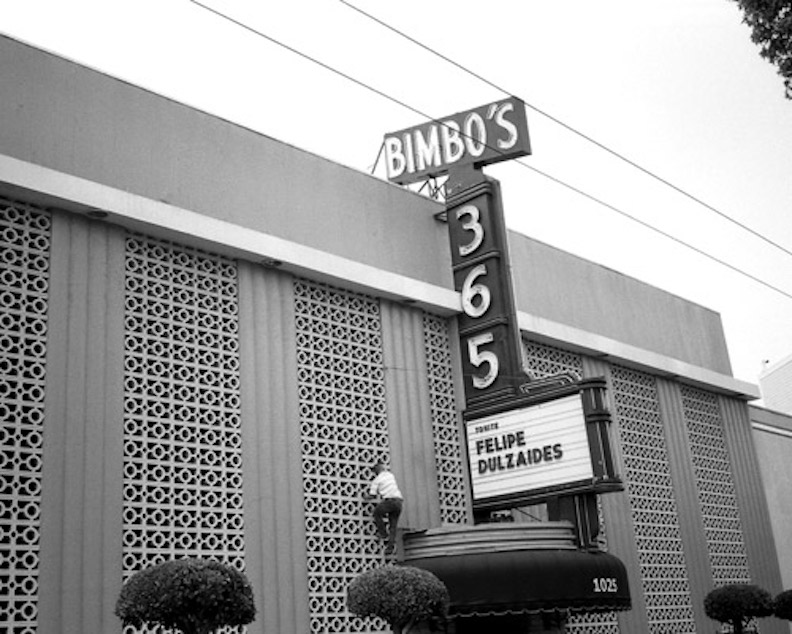 William Moncayo (He/They) is a visual artist and writer based in San Francisco, CA. Moncayo received a BA in Photography from San Francisco State University. Moncayo has worked for various art institutions and continues to do so as an Artist Guide at The David Ireland House.

Image credit: Felipe Dulzaides, It is my name (2009). Photo documentation. 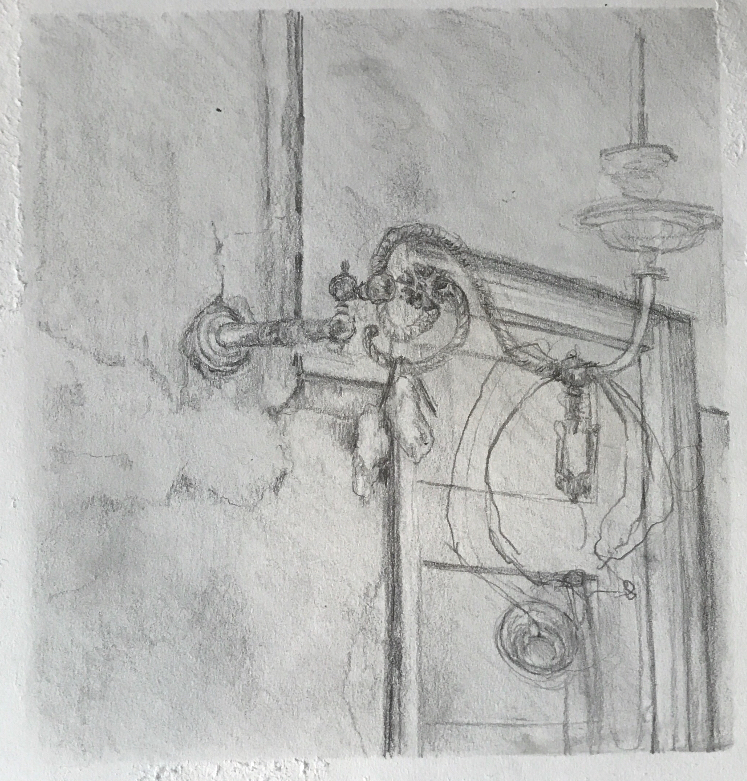 State of Touching is a performance lecture by Bells Howard wherein sculptural pieces, objects, and drawings of The David Ireland House will be juxtaposed with a reading from their essay State of Touching Part 2: Shudder. This lecture will include various experimental visual and auditory elements. Following the lecture, Howard will be exploring the concepts featured in Guston Bachelard’s Poetics Of Space in relation to various objects within The David Ireland House and the effect they have on the viewer’s body.

Bells Howard (They/Them) is from Portland, OR and currently resides in Oakland, CA. They are currently pursuing a BFA in painting from the California College of the Arts and have taken classes at the San Francisco Art Institute. Howard is an Artist Guide at The David Ireland House. 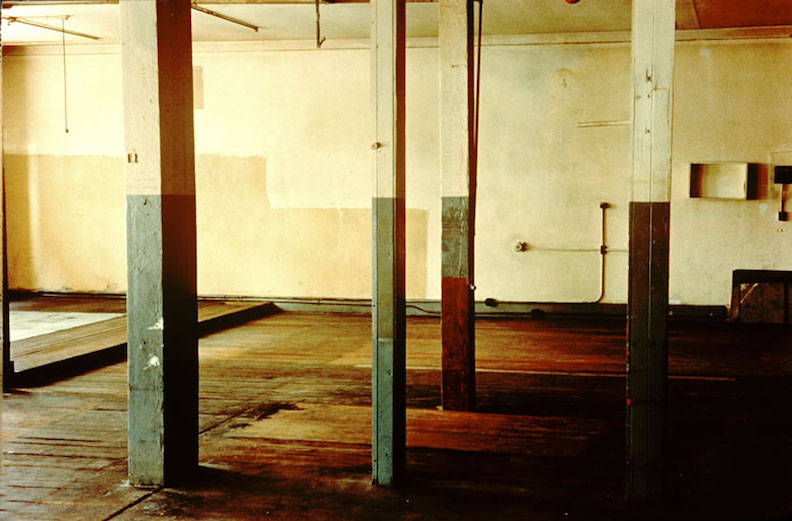 Sam Claude Carmel invokes the history of San Francisco’s conceptual art locales and the emerging possibilities for arts venues in the city. They will highlight Ireland’s concept of Maintenance Action and draw parallels to the labor of past art spaces—New Langton Arts (1975-2009) and the Museum of Conceptual Art (1970-1984) that served as the blueprints to the next generation of community arts spaces in San Francisco. Carmel will also examine the community building that made these past organizations successful, and expand on new strategies for the longevity and adaptability of San Francisco’s emerging arts spaces.

Sam Claude Carmel (They/Them) is a video installation and sculpture based artist residing in San Francisco, CA. Carmel graduated in 2019 with honors and a BFA in Queer Artist Studies from Mills College. Carmel works as an assistant video archivist and writer at TEXAS TOMBOY BRAND PROD and as an Artist Guide at The David Ireland House.

Image credit: David Ireland and Tom Marioni, The Restoration of a Portion of the Back Wall, Ceiling, and Floor of the Main Gallery of the Museum of Conceptual Art (1976). 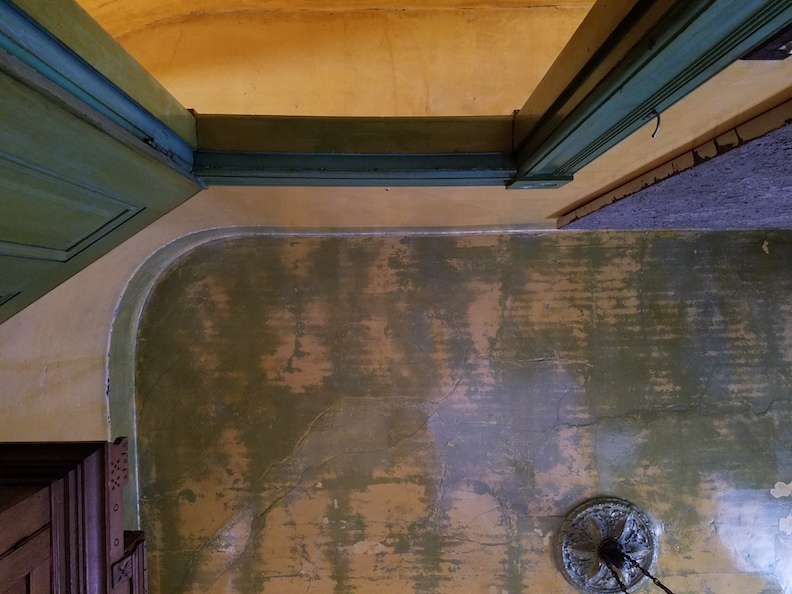 In this first performance lecture, Green or Otherwise: Care, Color, and Ceilings, Justin R. Nagle will delve into David Ireland’s use of the color “Institutional Green” and discuss it in relation to his treatment of the ceilings within 500 Capp Street to better understand care through the metaphor of concealment. The lecture will be followed by a short, guided meditation, using a ceiling in the House as the focal point, to give pause and further contemplation on the often overlooked space above our heads.

Justin R. Nagle (He/They) is a fiber artist and critical writer living and working in San Francisco, CA. Nagle has procured a BFA in Fine Arts and a BA in Visual and Critical Studies from the School of the Art Institute of Chicago and recently completed an MFA in Fine Arts and MA in Visual and Critical Studies at the California College of the Arts. Nagle self publishes writings and ephemera under the moniker Sad Fag Publications and currently works as an Artist Guide at The David Ireland House where they co-edit The Cabinet.

The David Ireland House announces the first long term residency of its kind with Bay Area artist David Wilson. Over the next four months, Wilson will be exploring the archives and situating the House in context of the neighborhood through a series of scored walks and drawing exercises. His residency will conclude with an exhibition, public ephemeral installations, and a series of public programs in spring 2021.

After an initial period of sinking into the House and its surroundings, Wilson plans to create a set of printed directions for visitors to discover sites of neighborhood intervention, with conceptual gestures inspired by David Ireland. These directions offer a constellation of independent experiences that result in a shared intimacy–while remaining safely apart–as a unique opportunity to ‘convene’ in a time when gathering is not possible.

David Wilson creates observational drawings based in direct experiences with landscape and orchestrates site-based gatherings that draw together a wide net of artists, performers, filmmakers, chefs, and artisans into collaborative relationships. He organized the experimental exhibition The Possible at the Berkeley Art Museum and Pacific Film Archive (BAMPFA) and received the San Francisco Museum of Modern Art (SFMOMA) 2012 SECA Art Award. He has exhibited his work with SFMOMA, was included in the 2010 CA Biennial, and presented a Matrix solo exhibition at BAMPFA. Wilson has received grants from The Andy Warhol Foundation, Southern Exposure, The Center for Craft, Creativity, and Design, and the Kenneth Rainin Foundation. He is based in Oakland, CA. 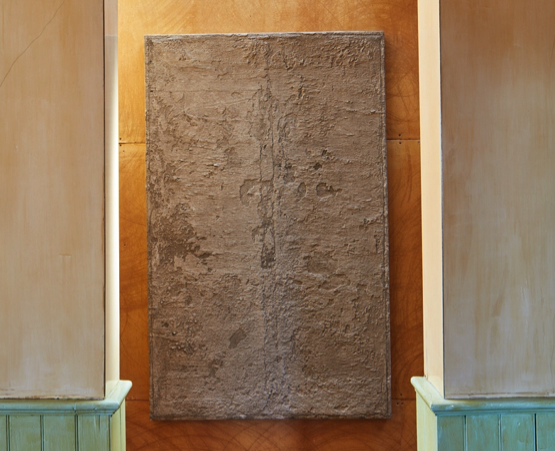 The average person will look at a work of art for 27.2 seconds.1 In this moment, what will they see, what do they think, what can they know? Let’s take a longer moment to look at a particular work of the artist David Ireland: a concrete painting from A Portion of: From the Year of Doing the Same Work Each Day (1975).

Start by looking at the cracks, the bevels, the rough and ragged surface of the concrete. See the uneven, worn structure. Look at how its surface seems so familiar and think how this could be any of the worn and depleted, weathered strips of concrete found anywhere. Know that David Ireland was fully familiar with the concrete of a city like New York. He could see the concrete on walks to his studio each day. Looking down, he could see it under his feet as sidewalks and streets marking changes from one place to another. Towering upwards, the concrete buildings rising high into the sky are symbols of progress and mastery by man over an elemental material. Ireland could see how concrete interacted with the environment and knew how it could act as a universal and basic tool.2

Take a moment to consider the concrete itself. Look at the folds and layers piled up on themselves. See how the familiarity of the concrete can lead to the sensation of feeling, the feeling of concrete burning under the summer sun or frozen over in winter. Just by looking long enough, you even get a sense for the dusty and rugged odor that permeates from the work. Ireland discovered this sensation of concrete as a tool following earlier experiments with other tactile material – copperplates, dirt, folds, and creases in paper– leading him to the idea that a deliberate process and repetition could integrate somatic experiences and bodily sensations into the artwork.3

Look closer still. Look past the surface of the concrete and the flakes of clay, sand, and shards of hardened gravel. Think to the moment before this was solid concrete – when it was all still a cement mixture of limestone and clay, sand, and gravel. Think of that moment, just before the cement was mixed with water to create a slurry. See the variations in the material itself and see those moments of Ireland spreading the cement over the canvas, forcing the wet cement to interact both with and against itself. Think of the transformation from one thing to another, beginning at one point before ending up as something else entirely.

Know that cement was cheap and available for Ireland. He could easily find a 94-pound bag of cement and use it again and again, over and over, every day. Know that Ireland spent his days in 1975 going to his studio, laying out a carpet of cement and immersing himself in an environment of gray dust that he would mix with water before covering over the canvas. Know that he repeated these actions until there was nothing left of that 94-pound bag of cement.4

Look to the color or lack thereof. See the variations of gray, the coldness and the distance it creates. Look at the nothingness that it appears to have in its seemingly monochrome and minimal aesthetic – its sparseness and reductive nature. See that emptiness, that void. See also, the capaciousness contained therein. Consider this emptiness, this space, containing all of the things that are not there. Know that we are left to confront this work, on our own, and on equal terms. Here, there is no painterly mark or signature style of a painter. See how Ireland removed himself from the artwork in his rejection of twentieth-century painting’s history of mark-making along with its associated symbols of the id and the ego. Know that Ireland rejected the idea of mastery over a material in favor of collaboration– that the material and the process itself was enough.5

Know that when the cement bag had been depleted and all of the canvases were covered, their surface having been transformed into concrete, Ireland discovered that he could continue the gesture of absence, of detachment. So, he began to discard each work – one each day – until they were gone, into the void. And this transformed the artwork once again, into something conceptual, into 94-pound Discard. But the discard was not entire. Ireland kept a few of these works, and it was this act of holding on that made it a relic of what had come before.6 And thus, this process of artmaking became transformed once more through Irelands conception towards his own experience with these objects. So, now, here in this moment, as we experience looking at the object, this relic allows us to think about one last thing.

If we take the time to look at all of the things present here before us, materially and conceptually, then maybe we can see in this Portion of: From the Year of Doing the Same Work Each Day, that the things contained by their own materiality are bound to all of the things that came before, and to all of the things that followed. This artwork shows us how a deliberate process can materialize the myriad moments that make up the nature of daily life. So, let’s take a moment to acknowledge that a series of concrete drawings, then concrete discards, then concrete relics, allows us to experience the world fully without overlooking it.

“All bodies, however, exist not only in space but also in time. They continue, and at any moment of their continuance, may assume a different appearance and stand in different relations. Every one of these momentary appearances and groupings was the result of a preceding, may become the cause of a following, and is therefore the center of a present action.“