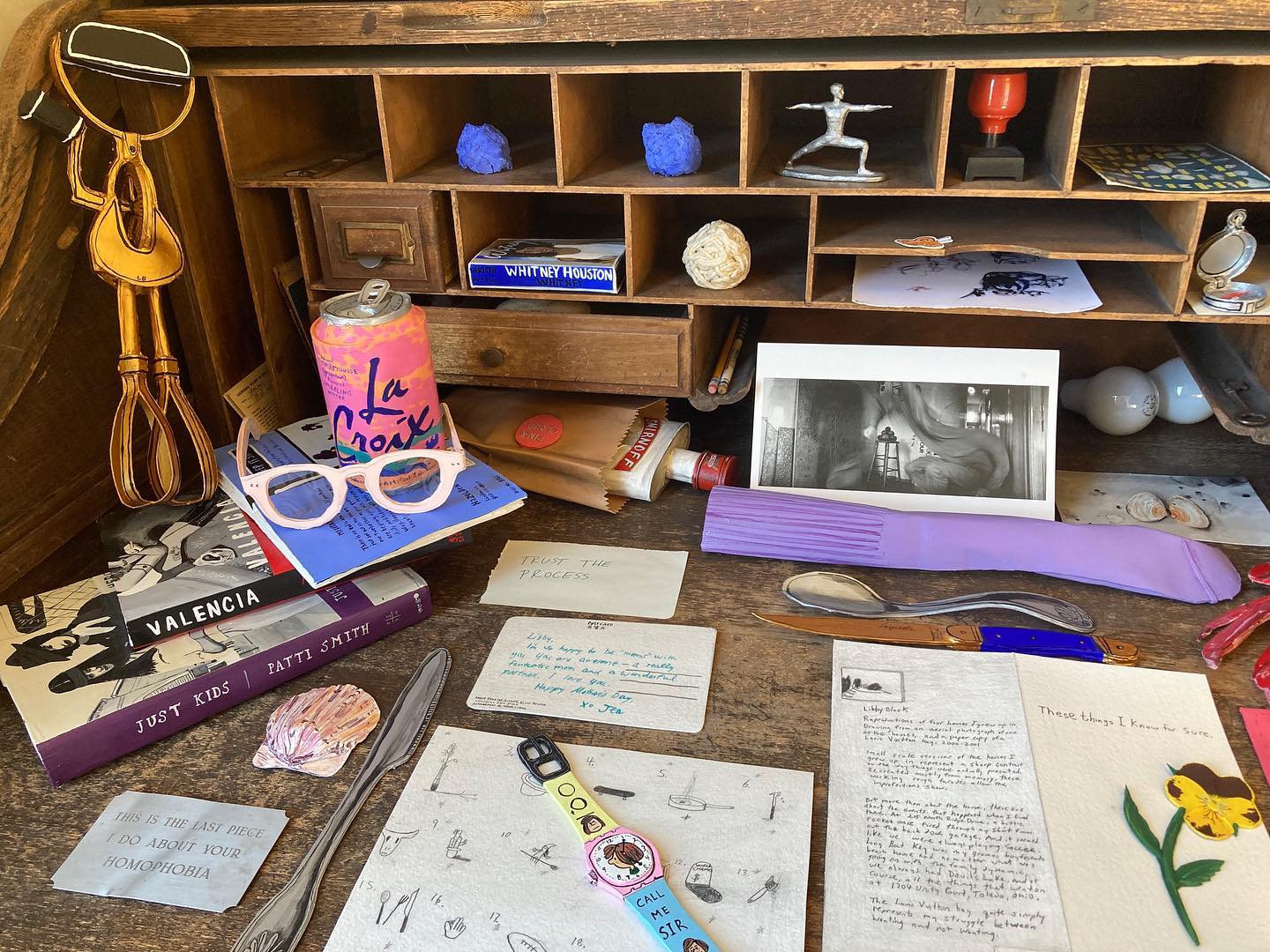 For her solo exhibition at 500 Capp Street, The Way Things Also Are, Black takes inspiration from late conceptual artist David Ireland’s home, archive, art practice, and legacy to both reveal and propose unseen narratives within the House’s domestic spaces and collection. Black unearths the women in Ireland’s archive; offers her own queer/lesbian framework for the House; makes visible Ireland’s often overlooked, early figure drawings, never before exhibited; and creates space for three rising artists to respond to them. The exhibition title, The Way Things Also Are, is a nod to the catalog title, The Way Things Are, that accompanied the first retrospective of Ireland’s work in 2004 at the Oakland Museum of California.

Black shares with Ireland a deep interest in common domestic objects such as dishes, brooms, and chairs. Her sculptural works are to-scale recreations of these objects made of paper, pencil, hot glue, and acrylic paint. She places these in still-life arrangements, creating hybrids that mix the real and the imaginary. She also produces two-dimensional paintings and drawings based on imagery culled from disparate sources from her everyday life, as well as newspapers and books.

To highlight the artists’ common interest in everyday objects, at Black’s request, The David Ireland House is bringing back Ireland’s much loved Broom Collection with Boom, 1978/1988, which will be on loan from SFMOMA for the duration of Black’s exhibition and then beyond to the end of the year. The last time the work was exhibited in the House was for its public opening in 2016. Black is creating free-standing paper broom sculptures that will stand in formation in the front parlor room alongside the rare display of this Ireland work.

In the House’s bedrooms, Black uses the mattresses as landscapes to explore a queer framework, creating a new narrative in the space alongside and in correspondence with Ireland’s works. Paper buckets turned on their sides on the beds bring to mind orifices, intimacy, and the representation of two women in love while also referencing labor, women’s work, and stereotypes of gender roles in the household.

From Ireland’s collection of archived show announcements, catalogs, and magazines, Black has excavated those that pertain to women artists, bringing them out of the boxes to make them visible in the House through a series of paintings and drawings that incorporate the archived materials.

Black has also pulled from the collection several never-exhibited, early works by Ireland, a number of figure drawings that reveal a softer side to Ireland’s oeuvre, such as a pencil sketch of a shirt hanging on a hook. Black writes of it, “So lifeless, but yet so full of life. Trying to be nothing else but a shirt hanging, surrendering, and offering its folds for one to see all its vulnerability.”

Citing Ireland’s role as educator and her own, Black creates space for three rising, local artists from San Francisco State University—Maryam Safanasab, AJ Serrano, and Nicole Shaffer. For Black, the inclusion of their pieces “grounds us in the present with the threads of the rich history of 500 Capp Street.” She states further, “ I chose these three artists because each deals in their own way with issues of location and identity which was important to me. I have grown to know them and their art practices through my work at SF State, and have wanted to share space with them and support them.”

Libby Black has exhibited nationally and internationally, with such shows as California Love at Galerie Droste in Wuppertal, Germany; Bay Area Now 4 at Yerba Buena Center for the Arts; California Biennial at the Orange County Museum of Art; and at numerous galleries in New York, Los Angeles, and San Francisco. She received a BFA from Cleveland Institute of Art in 1999 and an MFA at the California College of the Arts in 2001. Black is an Assistant Professor at San Francisco State University.

David Ireland’s Broom Collection with Boom, 1978/1988, is one of the most recognized assemblage and sculptural works by David Ireland. The work was a centerpiece at 500 Capp Street for nearly three decades before its acquisition by SFMOMA in 2007. It is composed of old salvaged brooms left behind by the House’s former owner, accordion maker Paul Greub. These are wired together into a ring and arranged in a clock formation. The brooms stand on their bristles and are arrayed from the least to most worn in a counterbalance, stabilized by a boom. Ireland considered this work a social sculpture because he felt that the brooms were a social instrument of Greub’s day to day existence.