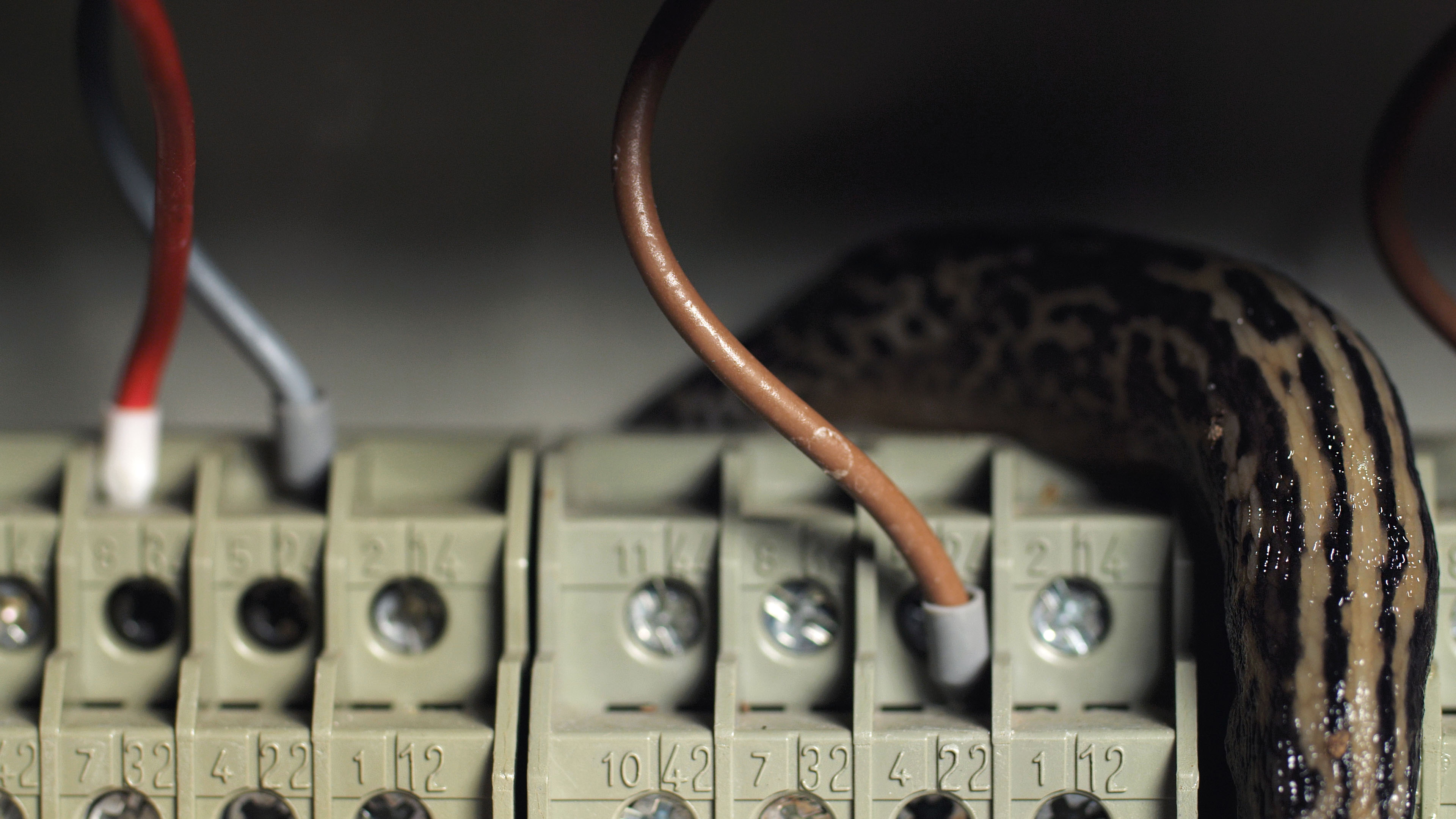 In the Garage and on the terrace: The 500 Capp Street Foundation is proud to present Drag-Out, a solo exhibition by the Swedish born, Berlin-based artist, Nina Canell, whose practice has consistently addressed material and immaterial sculptural relations.

Drag-Out draws significant attention to the infrastructure of our built environment and its relationship to natural material creep. At the center of the exhibition is Energy Budget, (Nina Canell & Robin Watkins, 2017-18): a two-part video that juxtaposes a slow-moving leopard slug on an electrical switchboard, with a series of large passages that have been built into housing complexes at Telegraph Bay, Hong Kong.

The closely framed video shifts our sense of scale and heightens the slug’s textured body. Guided by light, humidity and smell, the subject operates like a vessel transferring energy that is contingent to its environment. The second part of the video takes place in Hong Kong’s Telegraph Bay, where at the end of the 19th century, the island’s first subsea telegraphy cable was installed. Slowly zooming out, the video reveals large architectural passageways known as dragon holes, that were designed to allow dragons to descend from the mountains to drink and bathe in the ocean, while also creating portals for energy to move freely through the city. By combining real-time motion with a pneumatic zoom lens, the video is caught in a hesitant symbiosis.

The slow-moving and surreal undertones of the video are carried unto a series of sculptures installed on the Foundation’s terrace. Both sculptures in the exhibition are materially diverse, allowing a space between the synthetic and organic to function as a conductor of energy and information. Brief Syllable (Bare), 2017, is a short segment of a subsea umbilical cable, a section of cut infrastructure that literally exposes the engineering of transfer and exchange. Gum Drag, 2017, is comprised of two sculptures made from mastic gum––a viscous tree resin extracted from the pistachio tree––that slowly transforms through the duration of the exhibition. Operating on an unhurried timescale, the gum responds to material friction, temperature, and humidity, as it spreads across the terrace floor. The sculpture follows a gradual, viscous trajectory, such that the natural surroundings of the outdoor space at 500 Capp Street will effect the transformation of these works over the two-month long exhibition.