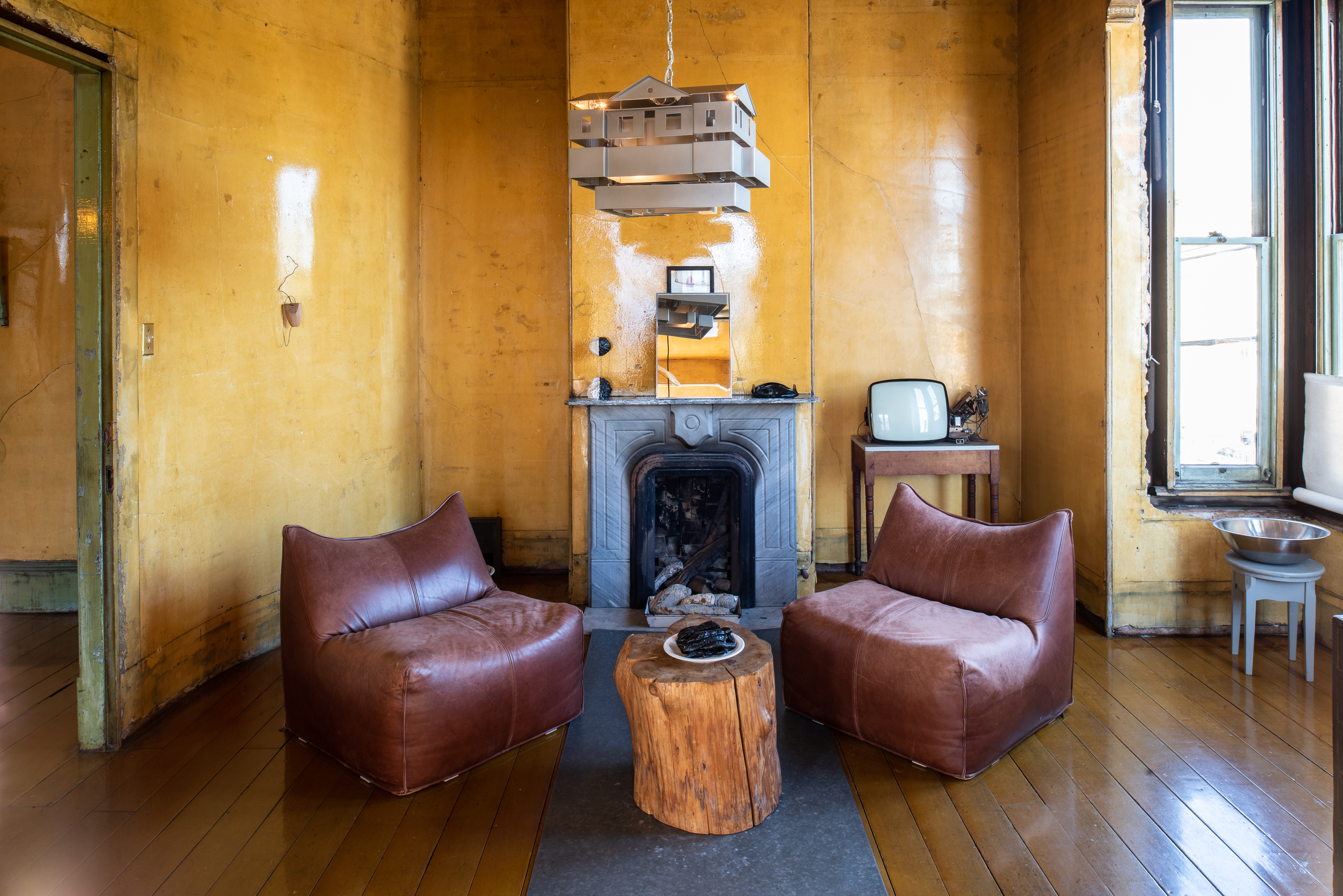 The 500 Capp Street Foundation is proud to present one of the most influential artists of our time: Mike Kelley (1954–2012).

Here, contemporary conversations and ideas merge with historic voices, echoing through the foundation like feedback. This exhibition brings together artworks from Mike Kelley’s Educational Complex (1995) and Day Is Done (2004–2005) into the uncanny environment of 500 Capp Street. With a wide range of media, Kelley’s work explores themes as varied as punk politics, religious rituals, social class, and repressed memory. Using architectural models to represent schools he attended, Educational Complex presents forgotten spaces as frames for private trauma, both real and imagined. These works are intended to evoke not only Kelley’s own memories but also broader social issues concerning childhood. Educational Complex is a series of artworks that investigate these ‘blank architectural areas’—unobtainable memories from school experiences that lay dormant or repressed. Within his Extracurricular Activity Projective Reconstruction series, Kelley attempted to produce narratives that would fill in these blanks. Pushing and pulling, pulling and pushing becomes a site of excavation, a visual framework to actively contemplate what is not there, a structural constellation looking at the ‘just past,’ in order to map the ideological confines of the present.

At the heart of the exhibition, presented on the floor in Ireland’s upstairs Parlor Room, is Kelley’s Mechanical Toy Guts (1991–2012). This artwork spans the gap between Kelley’s Educational Complex, as well as Day Is Done. Mechanical Toy Guts, is one of Kelley’s last completed artworks; it consists of stripped sound boxes from children’s toys arranged in two groupings: white sound boxes on a white textile, and black boxes on a black textile. While the cacophony emanating from the sound boxes evokes his early performance and experimental recordings, the piece also references Craft Morphology Flow Chart, his genealogical groupings of stuffed animals from the early 1990s. The toys’ deconstruction and the color-coordination of the sound boxes are subtle and poignant reminders that Kelley’s work, even at its most theoretical, is grounded in the real world.

Day Is Done, Extracurricular Activity Projective Reconstructions #2-32 (2004–05) features 31 carnivalesque videos based on photographs found in high school yearbooks. Kelley’s intention was to make 365 videos using the year (a series of 365 tapes) as a structure relating to natural cycles, creating a symbolist artwork. Originally presented as a 50 channel video/sculptural installation, this version of Day Is Done has been re-edited into a single channel format installed in the Garage. The photographs are carefully selected grainy yearbook pictures, each paired with a detailed reconstruction by the artist. These found, plausible, and fantastic images represent ritual forms and a social unconscious of Midwest Americana. This work creates an archive for the recovery of missing time, a visual guide where fiction and memory become confused. Installed throughout 500 Capp Street, the photographs from Extracurricular Activity Projective Reconstructions #2-32 (2004–05), are presented both fluidly and architecturally, salon-style.

For this exhibition, four iconic David Ireland artworks will be on view. Harp (1992), Untitled (Capillary Action,) 1995, Irish Headache (1987), and Flag of Spain, (1992–1994). These works were generously loaned from the Oakland Museum of California, University of California, Berkeley Art Museum and Pacific Film Archive, as well as a private collection in San Francisco. All four sculptures were made during a specific time period when both Ireland and Kelley shared an exhibition experience in Madrid, Spain, titled The Savage Garden, curated by Dan Cameron. These artworks have not been displayed in 500 Capp Street in over twenty years.

The critical ideas of play and theater in Kelley’s work, and the language that sustains these ideas, have become the driving force behind this exhibition. In expanding and reconstructing the physical infrastructure of Ireland’s home, a negotiation between Ireland and Kelley is made: a stage is set, space is considered, architecture is confused, and it becomes difficult to separate the psychological borders between what is real and imagined.