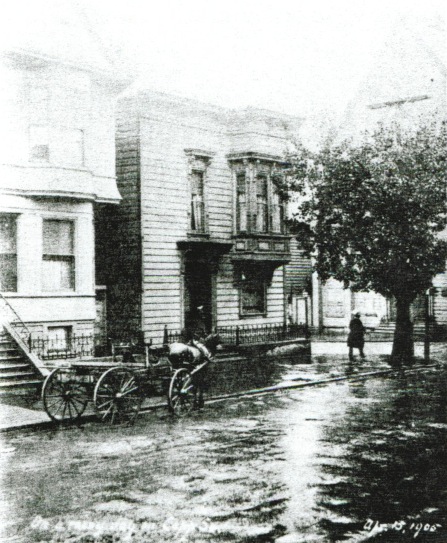 When David Ireland began removing layers of wallpaper from the interior of 500 Capp Street, he revealed the home’s history, including some of its quirks. The same is true as we continue to excavate underneath the house this week. These quirks have led our team to be very thoughtful about how to proceed with the placement of some of the structural supports below the house. It has also inspired us at the 500 Capp Street Foundation to revisit the origins of the home and the man who built it.

It has been widely reported that the original owner of 500 Capp Street was a sea captain – Captain Walton. But in truth Mr. Walton was a roofer by trade. In the mid-1880’s, Mr. Walton began a career in real estate and 500 Capp Street was his first property. As we discover peculiarities in the structure, we think about why the past owners, particularly Mr. Walton, made the choices that they did.

The Foundation would love to eventually have an uninterrupted timeline of all the changes that took place within the walls of 500 Capp Street over the past 128 years. This may prove to be an impossible challenge. While some of these quirks have logical answers, some require more research, and still others we will never know the answers too. While the 500 Capp Street Foundation and scholars continue to research the home, we often rely on the stories of people who have visited the house in the past. As part of opening up an online dialogue about the house, we invite you to share any stories you may know about the house! Feel free to leave such stories in the comments below or email us at info@500cappstreet.org