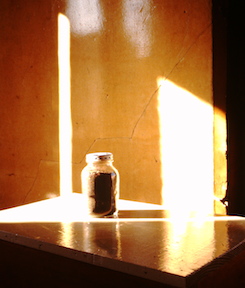 After a brief lull last week, construction moved along this week. Steel beams for shoring arrived on site and are being cut to fit and installed to support the underside of the house. The staff at the 500 Capp Street Foundation took care to salvage windows, bathroom fixtures, and wood from demolition. But we also decided that the excavated dirt from underneath the house was also important to save. This raised the eyebrows of our construction foreman. For most renovations of historical homes, this would seem like an odd priority. But not for David Ireland’s house!

Throughout his time at 500 Capp Street, David Ireland mined material from all areas of the home, including wallpaper from the walls, dust from the windowsill, and dirt from the basement. He incorporated these materials into his artistic practice, and thus created an entire body of work centered around the house.  In developing the programming for the 500 Capp Street Foundation, this notion of Place as source material greatly influenced our planning process. Inspired by David Ireland’s and 500 Capp Street’s ongoing influence of artists in the Bay Area and nationally, one of the main components of the Foundation’s programming will be an Artist-In-Residency program. The 500 Capp Street Foundation looks forward to the creativity that the house may bring to the artists invited to the residency. We plan to make available some salvaged materials (including the dirt!) for their use so that the legacy of 500 Capp Street as muse and supplier of material will continue.