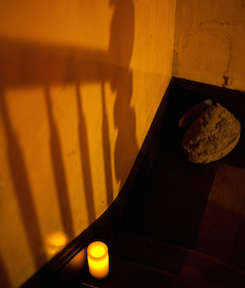 Congratulations to the 2014 World Series Champions – The San Francisco Giants!!! With so much of the week’s festivities in San Francisco focused on the World Series, Halloween and Dia de Los Muertos has snuck up on us pretty quickly! The celebrations after the Giant’s victory on Wednesday took a toll on the Mission District, but miraculously 500 Capp Street was spared from any damage. This is not the first time the house has been “miraculously” spared from harm. This streak of luck at times seems too good to be true. In fact, such luck seems a little bit…spooky!

In the San Francisco Bay Area, over 100 sites have been reported to be haunted.  Some of the most popular places include the Golden Gate Bridge, the Sutro Baths, and Alcatraz. 500 Capp Street is not considered a haunted space, but with its 120-year old history and unique features, it can at times give off a spooky atmosphere to visitors at night. When all the candles are lit the shadows of the exotic animal skulls bounce off the glistening walls. With such an atmosphere, such curiosity about ghosts is not surprising. During tours, we are often asked if staff or David Ireland himself ever had any paranormal encounters – While there are many peculiar things about the house, and even some peculiar energetic occurrences, we have never had any confirmation that any type of spirit calls 500 Capp Street home.

500 Capp Street will be open for special events, such as night tours during Halloween, once we re-open. These special events will allow patrons to see the house in new and different ways. We keep you up-to-date on all future programming via our website, and social media.