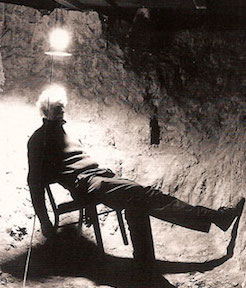 As an earthquake rolled through the Bay Area early on Sunday morning, it seemed like an oddly fitting start to the work week as our crew focuses on putting in the new foundation at 500 Capp Street to protect it from future earthquakes.

500 Capp Street has a long history of surviving earthquakes, including the 1906 and 1989 quakes. The one this week was no exception.The house made it through without a  single new crack or scratch. Architectural Resources Group had helped secure and prepare the house for any vibrations during construction, which also protected the interior from the vibrations of the earthquake.

With the completion of the demolition and salvaging phase last Friday, our team began work on prepping the basement for shoring and the pouring of a new foundation. The house currently rests delicately on the original brick and mortar foundation. The skilled team from Add-A-Garage is working throughout the week carefully excavating the entirety of the basement. This work in many ways has put David’s own excavation work into perspective. The dirt walls of David’s basement are rough with the pick and shovel marks, reflecting the tedious manual labor that it took to dig this space. It most certainly was a reflection on how important “process pieces” were to David’s work – similar to the repetitive motion of tossing a ‘Dumb Ball’.

The crew will continue throughout the week to complete the excavation, and the house will be properly shored with steel beams. These improvements will help to guarantee that 500 Capp Street is able to continue its miraculous track record of surviving disasters, including earthquakes.