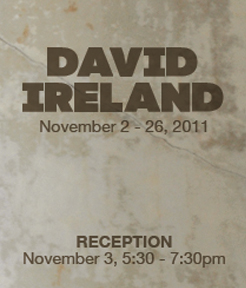 Gallery Paule Anglim is pleased to present an exhibition of works by the renowned San Francisco artist David Ireland (1930-2009).

In the early 1970’s, Ireland produced a number of flat works using cement, dirt and non-art conventional materials using resin or other binder media. These visceral planes share qualities of painting, architecture and sculpture and are easily perceived as found remnants. Ireland’s maxim, “You can’t make art by making art” is exemplified here in the way the experience and discovery of the material is predominant, triumphing over the willful creation of the piece.

A group of these works from Ireland’s studio will be presented for the first time in this exhibition.

Around the time of these works, Ireland began the historic transformation of the Victorian house at 500 Capp Street. Ireland’s process of restoration (cleaning with brooms, stripping off old wallpaper, lacquering floors) became his hybrid equivalent to sculpture, performance and painting practice.

“Art lets us make observations of things that were always there.”    D. Ireland 1978

His metamorphosis of the house bridged art and everyday activities and ultimately 500 Capp became a living sculpture. After the artist’s death it continues as the 500 Capp Street Foundation.

Ireland’s work is now on exhibit in the Los Angeles MOCA exhibition, Under the Big Black Sun, until February 2012. Gallery Paule Anglim has mounted five solo Ireland exhibitions over the past twenty years, and featured his work in a series of exhibitions Solid Concept (I-IV), 1989-2003.